On the 1st June 2019, students and their supporting families from Kuk Sool Won™ of Yeovil martial arts travelled to Norwich to take part in their national gradings as well as compete in the WKSA European martial arts tournament.

Many of the students were grading towards their goal of becoming a First Degree (1st Dahn) Black Belt and school owner, Stephen Runnacles started his 3 years of gradings to become a Master.  All were put to the test by high ranking Masters in Kuk Sool Won™ martial arts and all successfully passed.

After the national gradings followed the WKSA European Tournament where over 1,000 competitors from across the globe came to Norwich to compete.  Although only 16 students from Kuk Sool Won™ of Yeovil martial arts competed, they brought back a total of 35 medals, coming 23rd out of 58 schools who came from all over UK and Europe to participate in the tournament.

The weekend ended on an emotional high seeing six of our original students when we opened our doors in 2015 successfully promote to First Degree Black Belts.

SBN Steve Runnacles school owner says “our students put themselves in the spotlight to perform which is not an easy task.  A particular high was seeing our original students achieving their Black Belts.  We offer free martial arts taster classes to both children and adults and people can find out more details at www.martialartsyeovil.co.uk”. 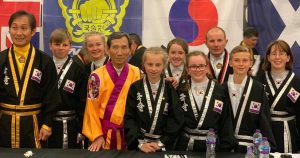