Skip to content
There are many things expected of a Kuk Sool Won student when they undertake a grading for their next belt, but the two main pillars of the Kuk Sool Won spirit are etiquette and respect.
All students are encouraged to learn and properly undertake all forms of etiquette and respect to each other. It is through proper education and corrections that all students may fully appreciate the physical and mental training of Kuk Sool Won. Etiquette and respect must be shown throughout the course of a grading, if a student fails to do this, no matter how good their techniques or forms may be, they will not pass their grading.
We have had a great week of martial arts gradings, culminating with the red belts and above grading for two hours on the Sunday.  Forms in four directions, tested on their techniques as well as sword cutting, staff spinning and board breaking.

Everyone went away sweating but smiling!

Belt promotions now coming up this week – a lovely way for us to reward our students for their hard work over the past three months. 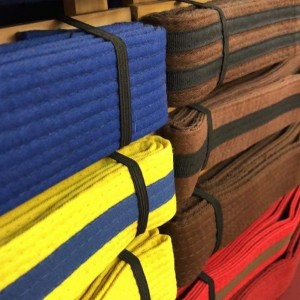